Another Star of the Show – the Lotus 58 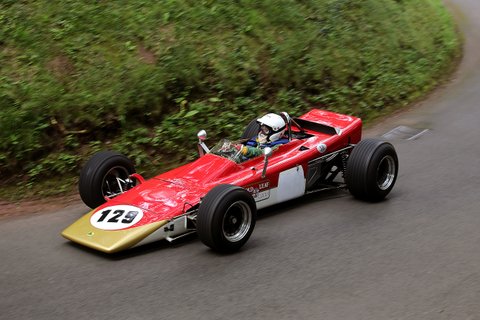 The Lotus 58 was conceived at a radical approach to the Formula 2 category for 1968.

The advent of wider tyres and aerodynamics was predominant in design thinking. The radical layout of the 58 showed, with a De Dion front and rear axle to keep all wheels in an upright position when cornering hard, and the wedge style profile was its own wing. Shown in gold leaf colours for the first time, it was due to be tested by Jim Clark on his return from the Hockenheim Formula 2 Race, sadly he never made that test.

Graham Hill and John Miles subsequently drove the car and whilst the handling is superb, it was just too slow. Later on the car received a 2.5 DFV Engine for the Tasman Series. Again, Graham Hill drove the car, but the Team decided to take the well established Lotus 49 to the Series. The car was abandoned at Hethel until Clive Chapman, with the help of Malcolm Ricketts, decided to restore and again runthis most unusual Racing Car. Graham Hill was right – too heavy and slow, compared with other Historic Formula 2 Cars racing.
The car is now used for display, hill climbing and track events.’